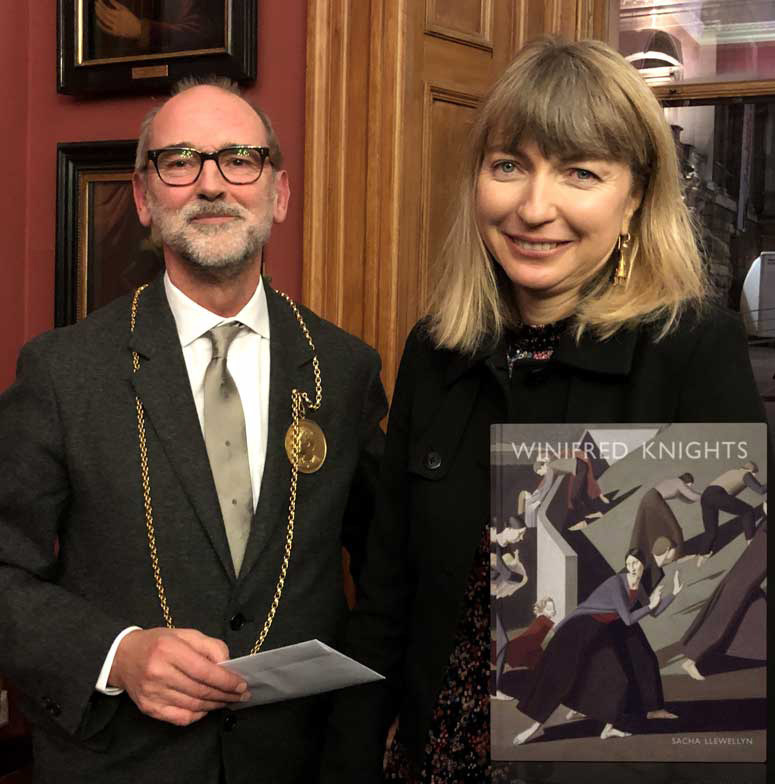 Christopher Le Brun, President of the Royal Academy of Arts, presents Sacha Llewellyn with the £5000 William MB Berger Prize for British Art History. Winifred Knights: 1899-1947 was published by Lund Humphries in association with the Dulwich Picture Gallery in 2016.

The artist Winifred Knights (1899-1947) was once all but forgotten but a recent book about her life and work has won this year’s William MB Berger Prize for British Art History.

Sacha Llewellyn, an independent researcher, curator and co-founder of dealership Liss Llewellyn Fine Art, wrote the book which was published by Lund Humphries in May 2016 in association with The Dulwich Picture Gallery. Winifred Knights: 1899-1947 brings together a selection of previously unpublished material including letters, diaries, sketchbooks and photographs.

Its release coincided with the first major exhibition of Knights’ work at Dulwich Picture Gallery, which Llewellyn also curated.

The publication provides the first full account of Knights’ life and work. She rose to critical acclaim during the four years she attended the Slade School and was the first British woman to win the Rome Scholarship in decorative painting. Her large work The Deluge (1920) is in the Tate collection. However, she fell out of the public eye in the 1930s as she struggled with commissions, mental health, personal tragedy and the outbreak of war.

“There could not be a better example of how to re-establish a reputation that urgently needed it,” the judges of the Berger Prize in a statement about Llewellyn’s work, adding that it is “a triumph of rehabilitation that will open up a whole group of neglected artists for future study”.

Christopher Le Brun, president of the Royal Academy of Arts, presented the prize at a reception in London on November 30. 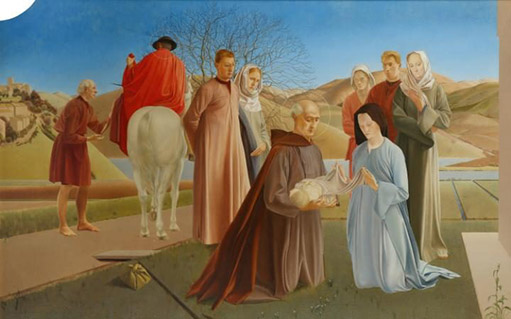 ... despite the fact that she was the polar opposite of prolific, it is shocking to discover that an artist blessed with this much talent could have been neglected for so long. Bravo, Dulwich Picture Gallery, for rescuing Knights from the deluge of obscurity.


www.telegraph.co.uk/art/what-to-see/winifred-knights-dulwich-picture-gallery-review-exquisite-never/
IT'S ABOUT TIME WINIFRED KNIGHTS GOT SOME ATTENTION 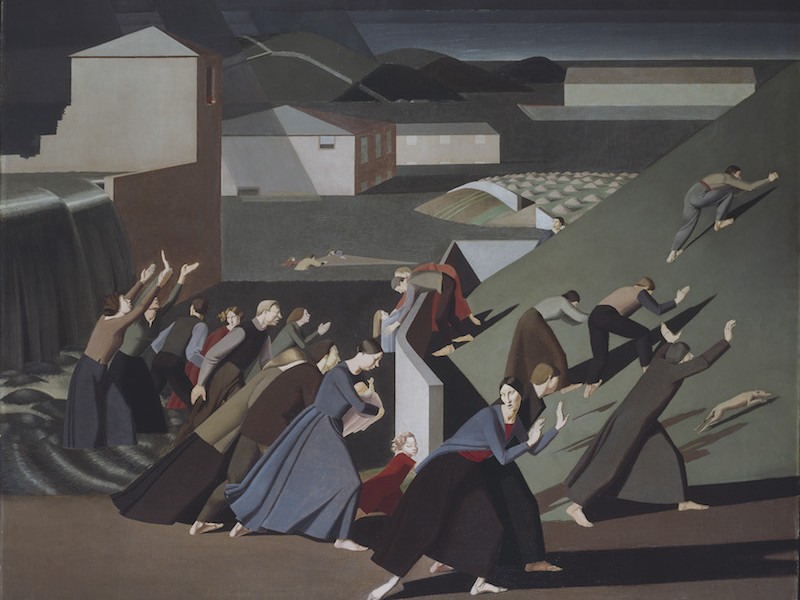 Through drawings, paintings and sketchbooks from public and private collections, this exhibition provides a vivid encounter with an artist whose neglect seems all the more curious given the distinctive qualities ... of her work ... Knights’ greatest achievement was her originality. 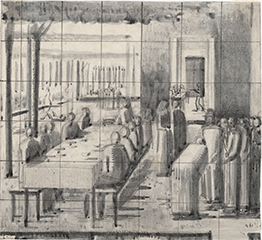 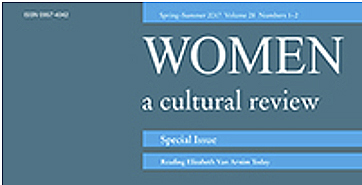 “... This exhibition at the Dulwich Picture Gallery in 2016, guest-curated by Sacha Llewellyn of Liss Llewellyn Fine Arts, brought together a selection of Knights’ major works for the first time since 1995. To coincide with the Dulwich exhibition, Llewellyn has provided an excellent catalogue with a detailed biography and perceptive commentary on Knights’ work. ...”

www.tandfonline.com
‘WINIFRED KNIGHTS GIVEN HER DUE AT LAST’ by Peyton Skipwith 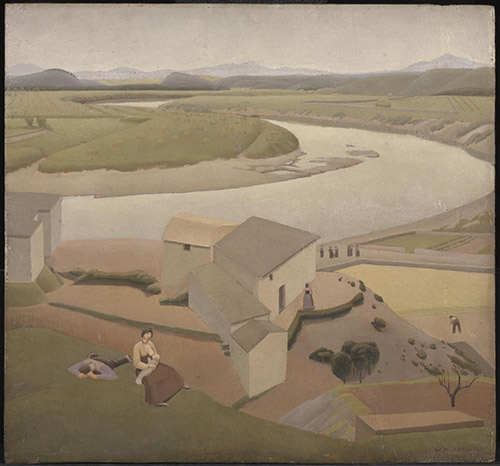 Winifred Knights is hardly a household name, but that is about to change; this summer she will be the subject of a retrospective at Dulwich Picture Gallery and of an excellent monograph by Sacha Llewellyn.


> www.fineartconnoisseur.com/2016/07/issue-july-august-2016/
'INTENSITY OF OBSERVATION, BOLDNESS OF COMPOSITION AND BEAUTY OF LINE', BY SUSANNA AVERY-QUASH 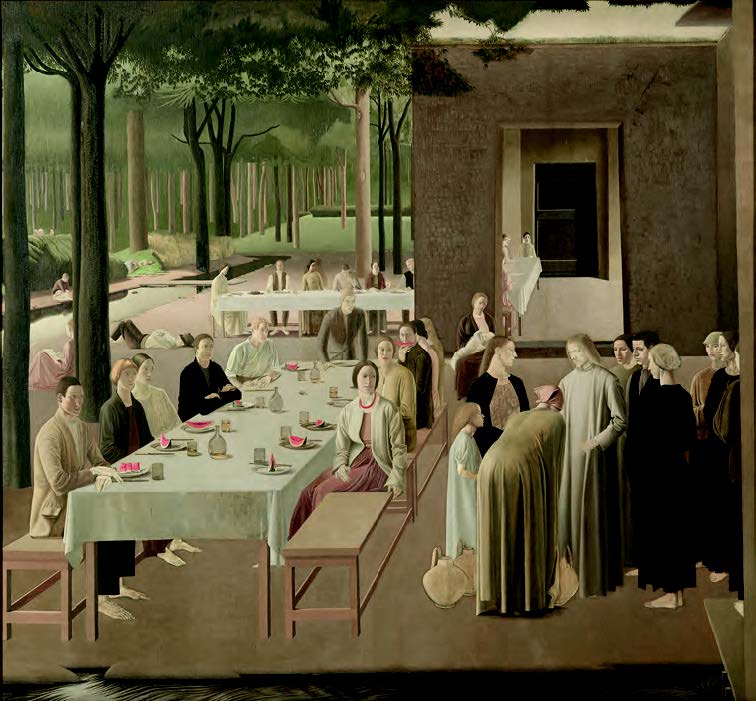 Sacha Llewellyn, who curated the exhibition and wrote its catalogue, has done much to revive the reputation of Knights and other artists of the British School at Rome ... the catalogue, scholarly, but highly readable, is important in expanding a number of themes central to the exhibition. 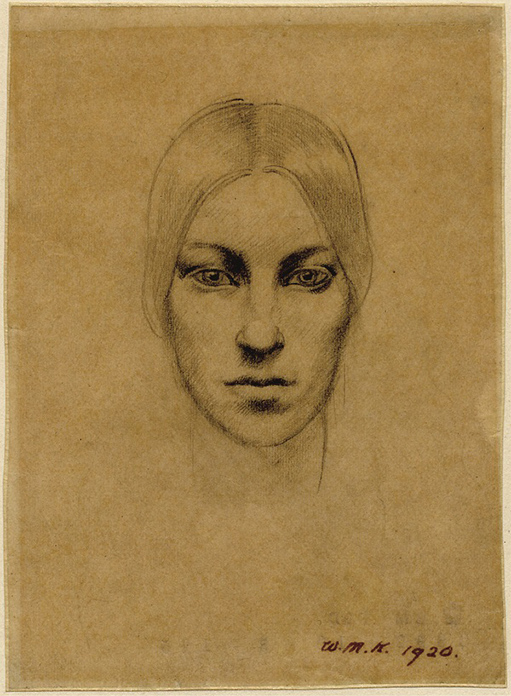 This is an exhibition that slowly yields its pleasures, and in the frenetic time we currently inhabit, it is also curiously soothing.

This beautiful retrospective leaves one wishing for more... 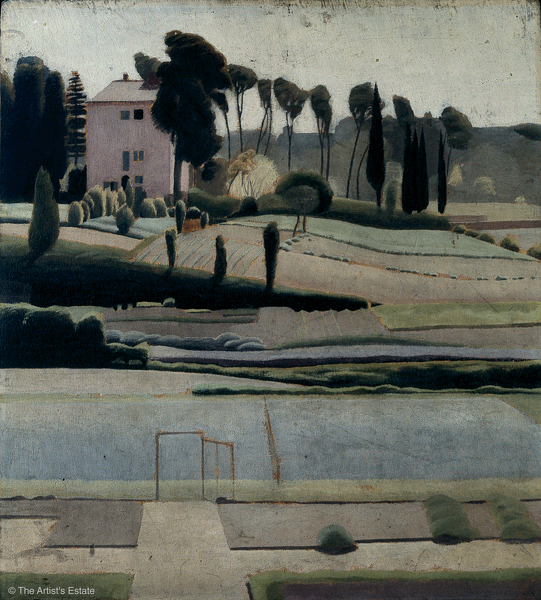 The ressurection of Winifred Knights is one of the big events of 2016. 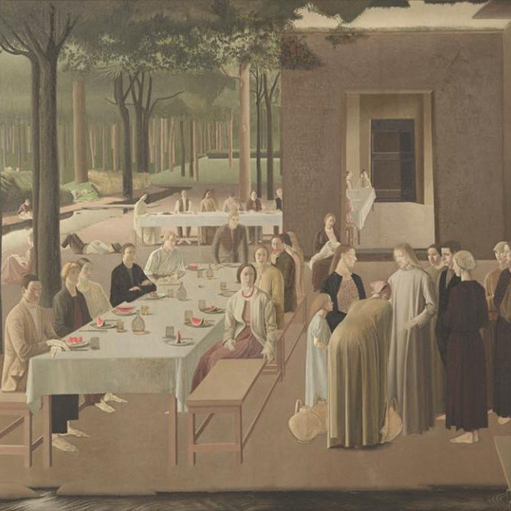 These exquisite, never been shown artworks by the British artist Winifred Knights (1899-1947), are a revelation. 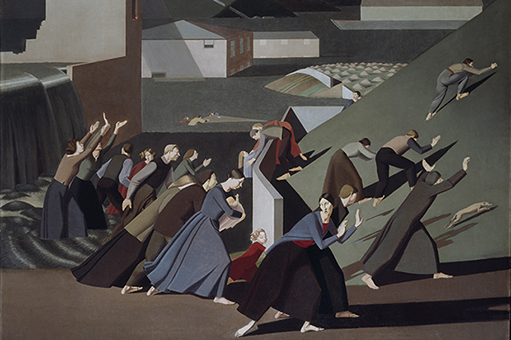 This forgotten artist’s strange and visionary pictures are full of echoes from the early Renaissance - in her finest work you can see she was, simultaneously, a lover of Piero and a member of the same generation as Salvador Dalí. 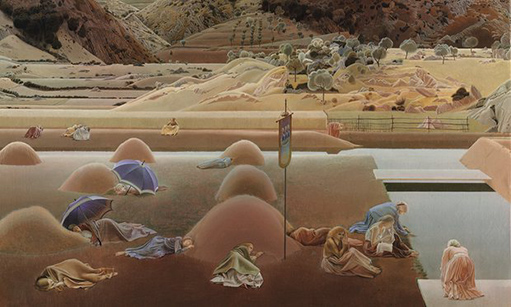 Knights’ use of classical subjects in a modern age made her the most promising painter of the 1920s. So why is she only now receiving her first retrospective exhibition?


www.theguardian.com/artanddesign/2016/jun/25/how-painter-winifred-knights-became-britains-unknown-genius
OUR QUIET GENIUS OF THE SHADOWS 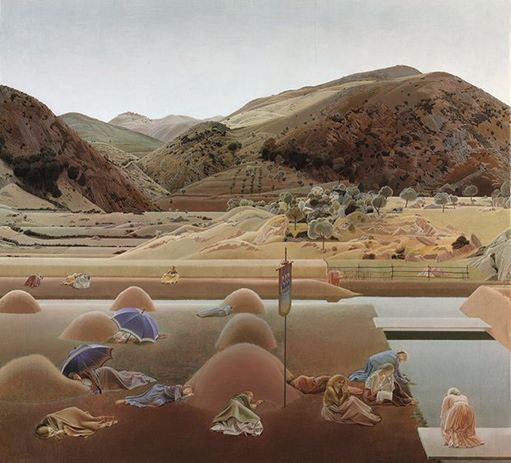 There is an intense sense of serenity, silence and deliberation, as in the art of Piero Della Francesca.
But Knights takes it all into the 20th Century. 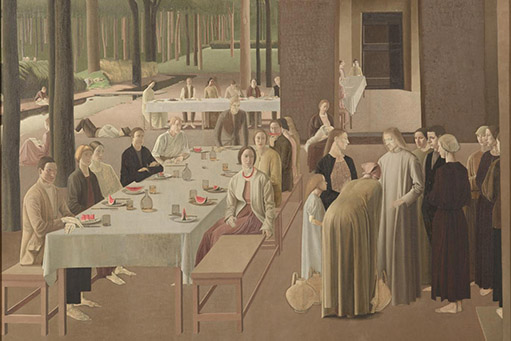 Winifred Knights may not be a major name, but this exhibition shows she produced some compelling pieces... 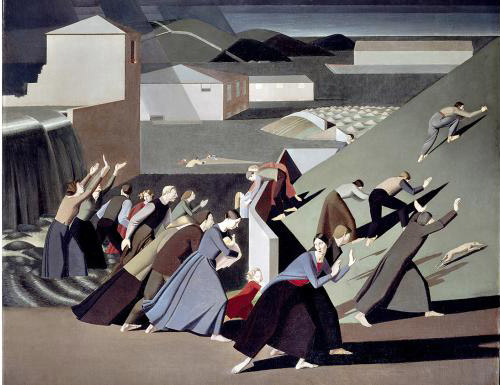 Winning prizes and scholarships, the artist was tipped for greatness — but she died in obscurity.
Now, a London show aims to rescue her name... 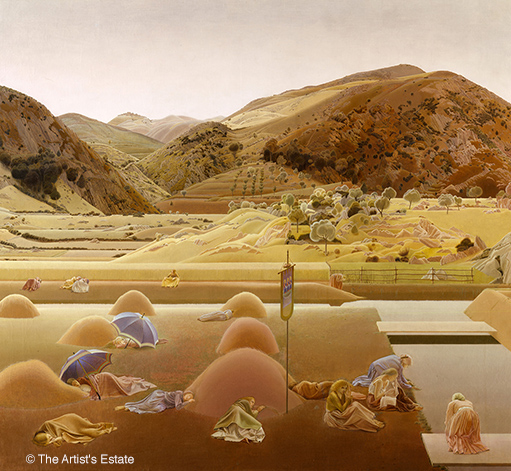 The first major retrospective of the artist's work reunites all of her completed paintings for the first time since their creation.

ARTISTIC GENIUS WHO TIME FORGOT GOES BACK ON SHOW 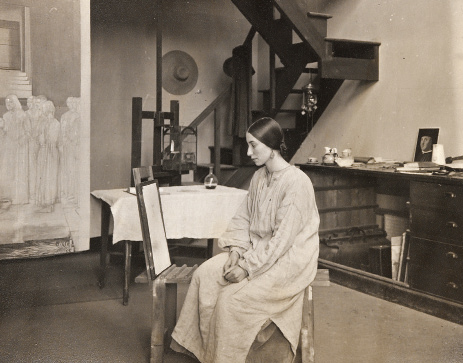 Winifred Knights, seen in the British School in 1923, was the first woman to hold the Rome Scholarship

Described as a “genius” and a “leading light” of 20th-century British art by her peers, Winifred Knights died in relative obscurity at the age of 47. Even attendees at the Tate Britain’s recent Fighting History exhibition, which offered visitors a chance to see her much-admired painting The Deluge, thought incorrectly that the work was by Stanley Spencer.

But now, seven decades after her death, a London gallery will host a major retrospective of the artist’s influential work. Dulwich Picture Gallery aims to re-establish the first woman to hold the prestigious Rome Scholarship as a leading light of 20th-century British art by putting on the retrospective next year, bringing together her major works for the first time.

The exhibition will be guest-curated by Sacha Llewellyn. “The quality of her work never ceases to inspire and amaze,” says Ms Llewellyn. “She never had a major retrospective in her lifetime, which makes it so exciting that it’s happening at last.

... Dulwich, meanwhile, is ploughing ahead with its own successful series of British modernist shows... I can’t wait to see what the gallery and the public makes of Winifred Knights (8 June–18 September 2016). Her work is not well known, and is often compared to (or indeed mistaken for) that of her more famous contemporary, Stanley Spencer. This show, which features every one of her completed paintings, along with some 120 drawings and sketches, will finally give her art a chance to stand alone. 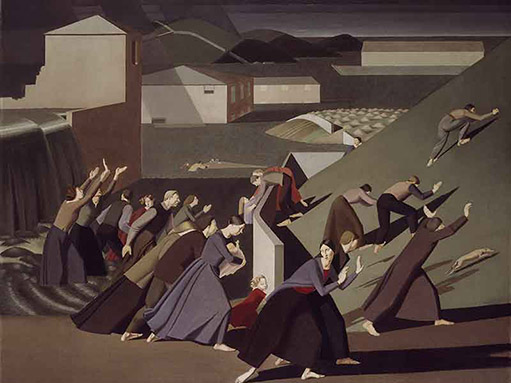